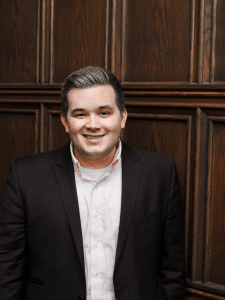 Zach Wehrli grew up outside of Salem, Oregon and graduated with honors from the University of Chicago, where he earned a degree in Political Science. As an undergraduate, Zach served as Chair of the International Policy Program at the Institute of Politics and Managing Editor of The Chicago Journal of Foreign Policy. In addition, Zach worked as a Metcalf Fellow in the Office of Undergraduate Admissions, studied abroad in Vienna, Austria, and managed Model United Nations conferences for high school and college students in Chicago, Illinois and Dubai, UAE.

Academically, Zach pursued a concentration in International Relations and a minor in Germanic Studies. His published honors thesis, a case study of U.S. agricultural development policy in Ethiopia, solidified his interest in global fragility and stabilization policy. During his senior year, Zach worked on a congressional campaign in Ohio, where he oversaw foreign policy and national security for the communications team. Throughout college, he completed internships at the U.S. Department of Agriculture and The Chicago Council on Global Affairs.

After graduating from the University of Chicago, Zach moved to Washington, DC to work as a Policy Associate at the U.S. Global Leadership Coalition where he helped manage the national security portfolio and coordinated the organization’s relationships with the federal government.

Zach will pursue a graduate degree in public policy, with a dual concentration in international security and international development. Zach is thrilled to be selected as a Payne Fellow and intends to leverage his graduate studies and fellowship experience as a USAID Foreign Service officer in the Crisis, Stabilization, and Governance backstop.