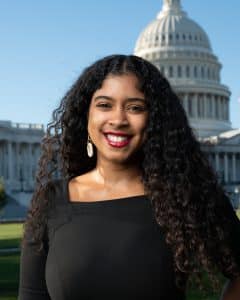 Nykarlis Santos Nunez was born in Puerto Plata, Dominican Republic and raised in Southern Indiana. As a first-generation college student, she graduated with a Bachelor of Science in International Business and a Bachelor of Arts in French from Northern Kentucky University (NKU), while simultaneously working three part-time jobs. She also studied two semesters abroad at Caen University in France for French language and culture and the University of Applied Sciences in the Netherlands for Sustainable Business. To better serve her community at NKU and in the Greater Cincinnati metropolitan area, Nykarlis served as the Co-President of Habitat for Humanity, President of French Club and as a Head Peer Mentor for four mentor programs for African Americans, Hispanics, international and first-generation students.

After graduating from NKU, Nykarlis worked for an international peace education children’s program in Cincinnati and volunteered at a Women and Children’s Center in Senegal, Africa serving as a French Teaching Assistant for low-income children and homeless pregnant women. Shortly after, her passion for service and international affairs intensified when she went on a six-month, multi-continental solo backpacking trip visiting Africa, South America and Europe. After her travels, she worked for the U.S. House of Representatives and served as a Congressional Legislative Intern for Congresswoman Yvette Clarke (NY-09) and later became a Staff Assistant and Intern Coordinator for Congresswoman Kathy Castor (FL-14) during the Covid-19 pandemic. While in Congress, she served as the Democratic Co-President and Communications Director for the Capitol Hill Community Service Association, Programming Director for the Congressional Hispanic Staff Association, and was an active member of the Congressional Black, LGBTQ+, Women and Progressive Staff Associations as well as the Black Women Congressional Alliance.

As a 2022 Payne Fellow she hopes to gain the skills and expertise to assist our global community with education and environmental issues and to serve as a bridge between cultures. Furthermore, to promote global understanding she launched a YouTube channel called Traveling Sola where she shares her travel experiences to encourage other young people to explore the world. In her free time, Nykarlis enjoys instructing virtual Zumba, cooking and French classes and co-hosting a bilingual Hispanic radio station in Maryland called Latinvibes Radio.