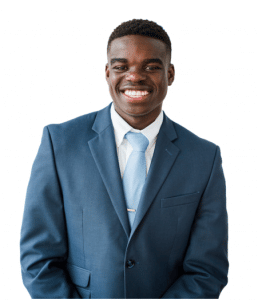 Nehemia Abel is a Burundian refugee born in Tanzania. He grew up in Fredericksburg, Virginia. A first-generation college student, he graduated from the University of Mary Washington (UMW) where he majored in marketing. His journey as a refugee ignited his passion for public service and added impetus to his pursuit of a USAID Foreign Service career as a Payne Fellow. To better serve the community of refugees in the Fredericksburg region, he co-founded an organization called Ubumwe, which means “unity” in his native language of Kirundi. The organization serves Burundian refugees as they pursue higher education and prepares them for the workplace, by providing mentorship and networking opportunities.

While at UMW, Nehemia received the Citizenship Award for Diversity Leadership. In this capacity, he worked closely with multicultural organizations to promote diversity and inclusion through campus-wide programs. Additionally, he collaborates with Habitat for Humanity and Micah Ecumenical Ministries to serve the homeless population in the greater Fredericksburg area.

Nehemia joined the 2020 class of Charles B. Rangel Scholars, where he enhanced his knowledge of U.S. foreign policies and career opportunities in international affairs. He was also a fellow with the U.S.-Africa Business Center at the U.S. Chamber of Commerce. In his spare time, you can catch him playing soccer and board games with his family and friends.