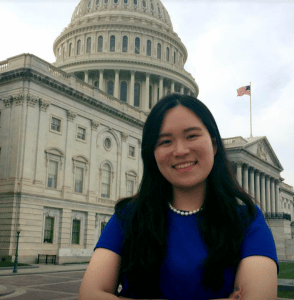 Na-Yeon Park was born in Daejeon, South Korea and lives in Palisades Park, New Jersey. She graduated with honors from Rutgers University, where she studied Political Science, Chinese, and International and Global Studies. Na-Yeon studied abroad in Taiwan and Shanghai, where she was a Gilman Scholar.

After graduation, Na-Yeon worked as a Congressional Fellow in the House of Representatives, and completed internships focusing on national security issues in the Asia Pacific region and on federal fiscal policy. Na-Yeon also taught English in Beijing and obtained Level 5 certification of the Hànyǔ Shuǐpíng Kǎoshì (HSK), the official Chinese language proficiency exam. Na-Yeon is currently based in Washington, D.C., working as a Project Associate for CRDF Global’s DPRK counterproliferation team.

Na-Yeon is committed to providing opportunities and mentorship to communities, and carrying out her duties as a Crisis, Stabilization, and Governance Officer with the USAID Foreign Service.