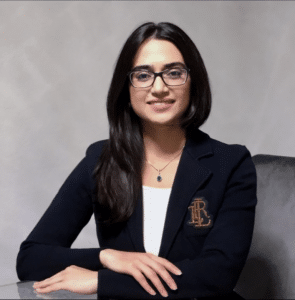 Muska Fazilat was two months old when her parents left Afghanistan fleeing the civil war. She spent the first ten years of her life as a refugee in Peshawar, Pakistan. Her family received their visas to come to the United States and settled in Southern California. Muska graduated with high distinction from the University of California at Berkeley with a bachelor’s degree in Public Health. She is a first-generation college student and one of the few students to have received the top three most prestigious undergraduate fellowships at UC Berkeley: the Bergeron Scholar Fellowship for Women in STEM, the Haas Scholar Fellowship for undergraduate research, and the Judith Lee Stronach Baccalaureate Prize.

During her undergraduate studies, Muska traveled to Afghanistan to conduct independent research on maternal mortality rates. As a UC Berkeley Visiting Scholar, she developed and implemented culturally appropriate maternal and reproductive health education program for mothers and adolescent girls in Dar es Salaam, Tanzania. Muska also volunteered as a multilingual medical assistant at a refugee camp in Athens, Greece. At the time, she was the only Farsi, Pashto and Urdu speaking medical assistant supporting the medical team as they addressed the health concerns of over 700 refugees.

Muska will be pursuing a master’s degree in Public Policy. She is absolutely delighted and honored to be a Payne Fellow, and looks forward to continuing to foster positive change in marginalized and disadvantaged communities across the world through diplomacy and development as a USAID Foreign Service Officer.