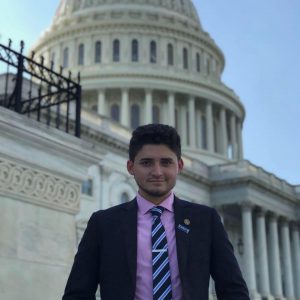 MA in International Training and Education

Lenni Joya Amaya was born in El Salvador, and immigrated to Long Island, New York at age 15. As a first-generation student, Lenni graduated from Marist College in New York with a double major in Political Science and Spanish, a concentration in Bilingual Education, and a triple minor in Latin American and Caribbean Studies, Global Studies, and Italian. During his sophomore year, Lenni studied in Argentina and interned with the Adventist Development and Relief Agency (ADRA) and the United Nations under the UNHCR agency. While living with the Argentinian community, he worked with organizations assisting marginalized communities including refugees and immigrants, LGBTQ+ populations, and indigenous people.

In addition, Lenni interned at the American Bar Association supporting undocumented immigrants detained by Immigration and Customs Enforcement (ICE). He was also a congressional intern through the Congressional Hispanic Caucus Institute. Lenni served as a newspaper editor, tutor, and translator in Spanish and Italian at Marist college, as well as with independent institutions, including his school district and the nonprofit organization KIND (Kids In Need of Defense). He taught English at different dioceses in the Lombardy region of Northern Italy.

Lenni is dedicated to addressing issues impacting the LGBTQ+ community, international development, education, immigrant rights, and the Hispanic/Latino community in the United States. Lenni will pursue a graduate degree in international affairs, with a focus on international development and Latin America. He enjoys learning new languages, reading non-fiction, watching documentaries, and eating international cuisine. Lenni is honored and thankful to be selected as a 2021 Donald M. Payne Fellow. He is thrilled to join the USAID Foreign Service as an Education Officer.