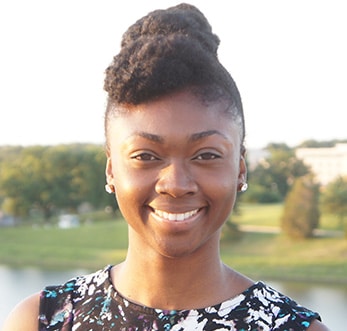 Lea Claye was born in Washington, D.C. and grew up in Beltsville, Maryland. Her family is from Sierra Leone which has been an important factor in choosing a career in international development. Lea first began her work experience with the U.S. Department of Agriculture (USDA) in 2008, as a Biological Science Aid with the Agricultural Research Service. It was here that she became interested in agriculture and subsequently became a USDA/1890 National Scholar.

As a USDA scholarship recipient, Lea worked with the Center for Nutrition Policy and Promotion (CNPP) on projects primarily with the Nutrition Marketing and Communication Division during her undergraduate years. She served as a Dietary Guidelines Public Comments Organizer, White House and USDA Blog drafter for Michelle Obama’s Let’s Move! initiative and the Apps for Healthy Kids competition, Super Tracker Test Case Organizer, and a tracker for MyPlate Media Coverage at the time of its release.

Lea’s adventurous spirit has led her abroad numerous times for academics, research, and personal travel. In 2011, she studied International Agriculture and French at the University of Quebec at Montreal. Later, she traveled to Seoul, South Korea and took public health courses at Korea University as a Benjamin A. Gilman Scholar. Her academic focus was maternal nutrition, epidemiology, and health policy in addition to Korean language courses. The following summer, Lea was accepted into the Minority Health International Research Training (MHIRT) program through the National Institutes of Health and the University of Alabama at Birmingham. After her experiences abroad, Lea’s interests in international development and public health expanded.

In May 2013, Lea graduated from North Carolina A&T State University with the highest honors for a Bachelors of Science in Food and Nutritional Sciences with a concentration in Dietetics and a certificate in Global Studies. That summer, she began working at USDA as a Nutritionist at the Food and Nutrition Services’ Child Nutrition Programs.

Fall 2015, Lea began her studies at Tulane University where she will earn a Master’s in Public Health with a concentration in International Health and Development. Lea is ecstatic to begin for career in Foreign Service with USAID and looks forward to improving the health of people in developing nations.