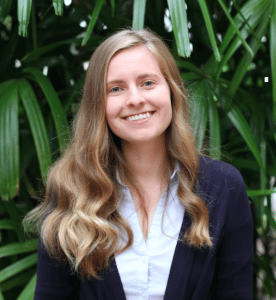 Kate Knight is originally from southern California but now resides in Savannah, Georgia. She graduated from Rollins College with a degree in international relations and a regional focus on the Middle East and North Africa. As part of the Bonner Leadership Program, Kate completed over 1500 hours of community service during her undergraduate career working alongside non-profit organizations whose missions centered on educational equity and refugee advocacy. Studying foreign languages has been a driving force in Kate’s personal and professional journey: she is nearly fluent in Arabic, spent several years studying Mandarin, and is also proficient in Swahili. Her interest in the Middle East and Arabic led her to Tangier, Morocco as a recipient of the Department of State’s Critical Language Scholarship.

Kate spent a summer conducting research on early childhood development practices in a rural district of southwestern Uganda. During her year studying abroad in Amman, Jordan, she taught English to Syrian and Iraqi refugees and volunteered with the International Rescue Committee. She has held policy-based positions and internships with the Washington Institute for Near East Policy, the Jordanian Embassy in Washington, D.C., and the Office of U.S. Congresswoman Stephanie Murphy. Kate has also spent several summers teaching English and developing primary-level curriculum in India, Tanzania, and Jordan.

Upon graduation, Kate was awarded a Fulbright grant to return to Jordan and teach English. In graduate school, Kate hopes to continue to explore the role of education in mitigating the social and economic inequalities that often result from conflict. She is honored to be selected as a 2021 Payne Fellow and plans to join the Foreign Service under the Education backstop.