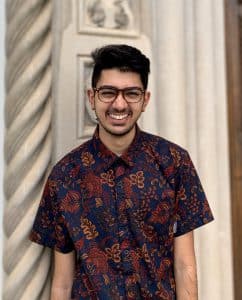 Deve Mehta is a proud native of Dallas, Texas. Deve is a first-generation, low-income student who spent the first few years of his life between Dallas and Gujarat, India. Deve graduated from Pitzer College in Claremont, California with a self-designed major in Public Health: Sexual & Reproductive Health and a minor in Anthropology. As a Gates Millennium Scholar, Deve was afforded the opportunity to study abroad through SIT/IHP’s Health, Culture, and Community program where he learned to engage in exploratory research in India, South Africa, and Brazil.

In an effort to raise awareness of the complexities associated with global health issues and migration, Deve co-created a conference called Migrations: Refugees, Immigration, and Global Movement. Deve’s role as an Institute for Global-Local Action and Study (IGLAS) Fellow allowed him to further explore issues of intersectionality, diversity, and inclusivity. He developed training for students and faculty on issues such as microaggressions, implicit bias, and reproductive justice.

Deve’s training and methodology in anthropology centers the importance of lived experience and storytelling in developing robust policy decisions. Deve believes that formulating culturally competent and inclusive policy begins with centering conversations from people who are immediately impacted by various laws and policies.

Deve will be pursuing an interdisciplinary Master of Public Health focusing on global health and human rights. Deve is honored and grateful to be selected as a 2020 Payne Fellow and intends to join the USAID Foreign Service as a Health, Population and Nutrition Officer.