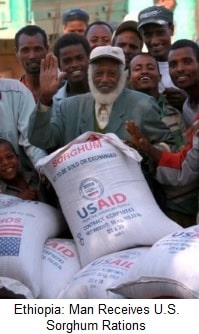 The United States has a long history of extending a helping hand to people overseas struggling to make a better life. It is a history that both advances U.S. foreign policy interests as well as reflects the American people’s compassion and support of human dignity.

Following the success of the reconstruction of Europe after World War II through the Marshall Plan and the Truman Administration’s Point Four Program — the 1950 program to engage in technically-based international economic development — President John F. Kennedy signed the Foreign Assistance Act into law in 1961 and USAID was created by executive order. Since that time, USAID has been the principal U.S. agency to extend assistance to countries recovering from disaster, trying to escape poverty, and engaging in democratic reforms.

U.S. foreign assistance has always had the twofold purpose of furthering America’s interests while improving lives in the developing world. The Agency carries out U.S. foreign policy by promoting broad-scale human progress at the same time it expands stable, free societies, creates markets and trade partners for the United States, and fosters good will abroad.

With headquarters in Washington, D.C., USAID’s strength is its field offices around the world  working in close partnership with private voluntary organizations, indigenous organizations, universities, the private sector, international agencies, other governments, and other U.S. Government agencies. To explore where and with whom USAID spends its foreign assistance dollars, visit https://www.usaid.gov/where-we-work.